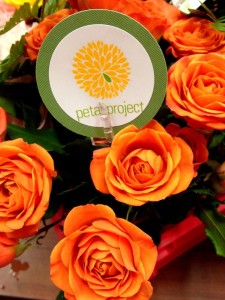 Our Foundress, Rebecca Kewley Holladay, always had a strong interest in Event Planning and also had dreams of one day opening an assisted living facility.  She realized that the flowers used at various events (weddings, funerals, corporate events, etc.) were often discarded afterwards and had the idea that these flowers could be repurposed. Thus was planted the seed for what would eventually become the Petal Project.

As a volunteer for Hospice, Rebecca shared the idea with the Volunteer Coordinator, Dan Smith. Both felt like they were on to something extraordinary, but shortly after developing the idea Rebecca’s father was diagnosed with stage 4 pancreatic cancer.  She only had about five precious weeks with him before he passed in June 2013. Of course, this was a tremendous blow, but in a sense it was this loss which helped give birth to something new, as it instilled in her a very real sense that tomorrow is not guaranteed to any of us. It was this conviction which served as the motivation for her to take action and turn the idea of the Petal Project into a reality.

In March of 2014, Petal Project started by delivering a dozen bud vases to hospice patients each week. It quickly became apparent that the work was having a tremendously positive impact, and the volunteers wanted to do more. They quickly secured a second source of flowers through the generous weekly support of John Geny of Geny’s Flowers and Bridal in West Nashville.  Of course, this expansion necessitated finding more helping hands and a place where the work could be done.  Enter Ashley Briggs, who was the manager at Morning Pointe assisted living facility in Brentwood. After learning of the work Petal Project was doing, Ashley felt the residents in the memory care residency at Morning Pointe (“Lantern”) would greatly benefit from helping to create the arrangements and interact with our volunteers.  It was an inspired idea that has been part of the Petal Project model ever since.

By incorporating the memory care residents into our volunteer pool, it has given both our volunteers and the residents a level of interaction that is immeasurably therapeutic for everyone involved.  With this approach, not only do the recipients of our arrangements benefit, but also the Lantern residents who are helping to create the arrangements for them.

Error: Error validating access token: The session has been invalidated because the user changed their password or Facebook has changed the session for security reasons.
Type: OAuthException
Code: 190
Subcode: 460
Please refer to our Error Message Reference.

We'll update you about special events and general announcements::